Is Moissanite as Hard as a Diamond | Comparing Durability 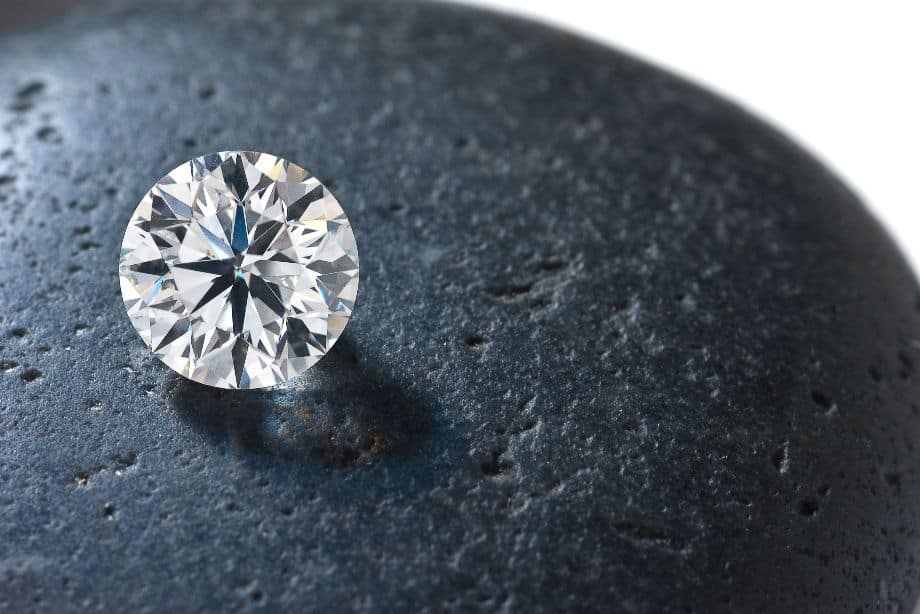 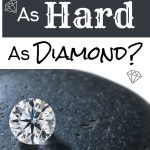 Both diamonds and Moissanite are beautiful stones. They look very similar, but are they similar in terms of durability as well? Is Moissanite as hard as a diamond?

Diamonds are the hardest stone known to man, but Moissanite is also incredibly hard. Diamonds are ranked at 10 on Mohs Scale of hardness, while Moissanite comes in at 9.25—making it the 2nd hardest stone. Greater hardness means improved scratch resistance. Both stones are remarkable in that category.

Hardness is only one factor of durability. It’s important, but it’s not the only important consideration. We’ll address some other critical factors below.

Which is Harder Moissanites or Diamonds?

In 1812, a German mineralogist named Friedrich Mohs used ten reference minerals to create a comparative hardness scale. He essentially tested the ten rocks against each other to see which ones were capable of scratching other rock samples in the group. Since softer stones can’t scratch harder ones, this experiment process gave Mohs the ability to order the stones from softest to hardest. The softest material (Talc) was assigned a rating of 1, while the hardest material (diamond) received a grading of 10. The eight other stones fell between 1 and 10 based on their relative hardness.

The Scale that Fredrich Mohs created is known as the Mohs Scale of Hardness. It’s still widely referenced today. Again, it’s a comparative scale—not a precise measurement. All minerals or gemstones can be compared to the ten-point scale to communicate, or determine, their hardness level.

All rocks on the Mohs scale can scratch all the other stones with a lower rating. For example, a level 5 gem or mineral can scratch every stone that ranks between 1 and 4.9. Likewise, a gemstone that scores a 5 can be scratched by any other gem that scores between 5.1 and 10.

While Moissanite isn’t the hardest stone known to man, it’s still incredibly hard. It ranks at 9.25 on the Moh’s Scale of Hardness. That means it’s the second hardest stone—harder than even Sapphires.

Those ratings mean that diamonds could scratch Moissanite, but Moissanite could not scratch diamonds. Because of these different hardness levels, you should take extra care when storing jewelry that contains a mixture of different types of stones. If various kinds of gems come in contact with each other (even within a jewelry box), accidental damage could happen to the softer stones.

Damage to a softer stone isn’t the only risk. Most gems are much harder than gold and other precious metals, so scratches can easily impact your band as well if you are careful. To avoid damage, make sure that your jewelry is held in place (immobilized) during storage, so it can’t come into contact with other pieces.

Why Does the Hardness of Moissanite and Diamonds Matter?

Gemstone hardness is vital in jewelry because it affects the amount of damage that could occur as you wear your ring in everyday life. Gems on rings are particularly prone to be bumped or scratched by other objects such as metal keys, doorways, pots and pans, and thousands of other everyday things. You use your hands constantly! Even when you aren’t actively picking things up, your hands are often in motion—in fact, you probably swing them by our side as we walk. All of these motions can cause a potentially damaging impact for a stone that’s too soft.

Diamonds are unlikely to be scratched through casual bumps against the common items you interact with daily. Moissanite is softer than diamonds but still incredibly hard—harder than garnets (a 6.5 to 7.5 on Moh’s Scale of Hardness), emeralds (7.5 to 8), and even Sapphires (9).

Even though both diamonds and Moissanite are unlikely to be scratched by normal contact with various everyday items, pressure can make a big difference. Imagine picking up a diamond ring with just two fingers and then very lightly dragging it across a piece of sidewalk. Because there was no real pressure, the stone will likely be unscathed. If you take the same ring and press down as hard as you can as you drag it across the same stretch of sidewalk, you’re much more likely to see scratches form. The more pressure you apply, the more likely the gem is to be damaged.

Which is Tougher, Moissanite or Diamonds?

Toughness is another critical component of overall durability. It’s different from hardness. Toughness refers to the resistance of a gem to shattering, cracking, breaking, or chipping when a hard impact takes place. Although many people assume that a ‘hard’ stone will also be ‘tough,’ that’s not always the case.

Diamond’s extreme hardness also makes it brittle. Rather than flexing when it receives a strong blow, it’s more likely to crack or shatter. In addition, diamonds commonly have cleave lines, or inclusions, that can further weaken them and make them more susceptible to this kind of damage. 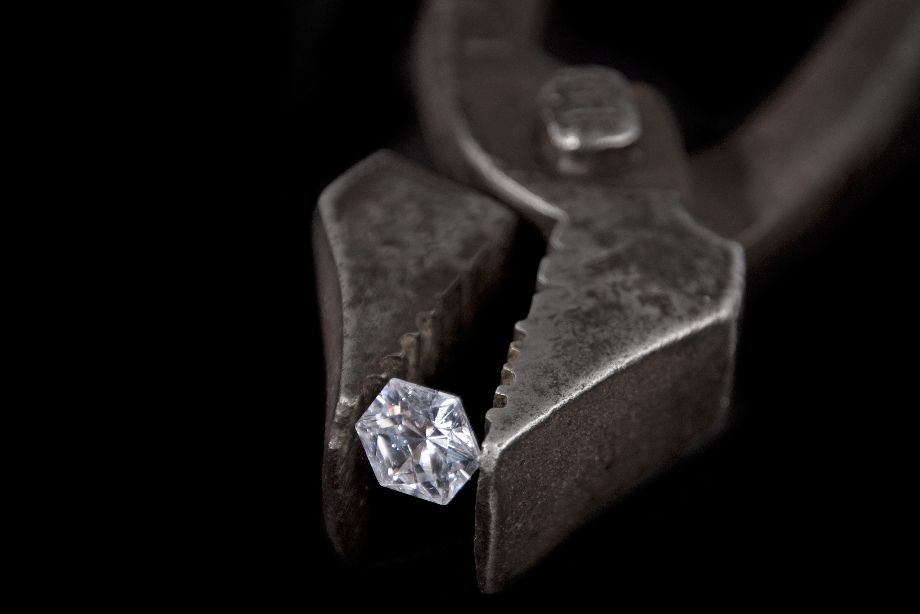 My sister once had a heart-stopping experience with her beautiful diamond ring. She took it off and placed it on a bathroom counter while getting ready for the day. At some point, the ring accidentally got knocked off the counter and fell to the floor. As she examined the ring for damage after picking it up, so noticed that the diamond had cracked right down the middle. It was an emotional day for her!

The jeweler who examined her broken gem told her that the diamond had an inclusion in the spot where it broke. The diamond hit her hard tile floor in just the right position to cause the stone to break along its weakest point—the inclusion. Fortunately, the ring was insured! She was able to collect enough money to replace it with something identical. It would have been a real financial hardship if the ring wasn’t covered. Most likely, she couldn’t have replaced it with a comparable ring at that point in her life. Accidents happen! Good ring insurance can be surprisingly inexpensive, and it offers a lot of peace of mind. This is the jewelry insurance provider that I trust most. They insure jewelry anywhere in the world, and It only takes about 30 seconds to get a free quote online.

Moissanite is less hard and less brittle than diamonds. It’s, therefore, less likely to crack, break, or chip. Moissanite also has fewer inclusions, which gives it fewer additional weak spots in the stone.

What is the Heat Resistance of Moissanite and Diamonds?

Moissanite has high heat resistance. It can tolerate temperatures in excess of 2000° F (1093° C). That’s a temperature that’s hotter than most house fires!

Diamonds are made from carbon, which influences how they react to heat. At temperatures above 1400° F (763° C), they can burn. The diamond crystals become smaller as the carbon and oxygen combine to form carbon dioxide. At high enough temperatures, the diamond begins to disintegrate, while any impurities in the gem are left behind in the form of ash.

Moissanite is far more heat resistant than diamonds—but does that really make any difference? When you are wearing your jewelry, it’s not going to come in contact with such extreme temperatures.

Jewelry is often exposed to extreme temperatures during manufacturing or repair processes. For example, jeweler’s torches are used to shape and join metals. Those torches can get as hot as 6300°F. Jewelers use different torches, gasses, and flame settings to control the temperature for various needs. The heat resistance of Moissanite makes it easier to work with and less susceptible to heat-related damage.

Moissanite’s heat resistance also makes it ideal to use in a variety of commercial applications that require a high heat tolerance. For example, Moissanite is sometimes used in ceramic brake discs for automobiles. The Herschel Space Observatory also appreciates the durability of Moissanite. Their space telescope has a moissanite mirror. Moissanite’s hardness, toughness, and heat resistance made it ideal for that application.

While Diamonds are harder than Moissanite, durability goes well beyond just hardness. You can decide which stone is most durable, but many feel that Moissanite is the superior stone once all durability factors have been weighed and considered.

All center stone options will be affected by the dirt and oil build-up that naturally occurs as you wear your ring. The more frequently you wear the ring, the faster that build-up will happen. That surface coating interferes with the ability of light to enter and exit the stone the way it otherwise would. The impact is a more muted, dull, and lifeless ring.

Diamonds aren’t impacted by the build-up of dirt and oils as quickly as many other ring options like Cubic Zirconia or White Sapphire. That means you don’t have to clean them quite as often to keep them sparkling. Of course, cleaning will always make them sparkle better, but they tend to sparkle right through the grime for quite a while.

Moissanite is MUCH less quickly impacted by lack of cleaning. It’s so sparkly that it can continue to throw off impressive light flashes through weeks and months without any cleaning or care. I’ve found it to be the lowest maintenance stone available. Again, while cleaning is still a good idea, and it can always maximize sparkle, Moissanite seems to be the least insistent that you make time to clean it regularly. If you want to learn how to quickly clean Moissanite jewelry, this recent post outlines the best processes.

The Cost of Moissanite compared to Diamond.

The cost difference for a Moissanite Engagement Ring and a Diamond Engagement Ring, for example, is significant. There’s typically an 85% – 90% savings on the cost of the loose stone. Of course, the metal (the ring) that the stone is mounted on will cost the same amount either way. When you look at overall savings on the finished ring, it’s commonly 50% or more.

Diamond is harder than Moissanite, but Moissanite is still very hard. Moissanite is tougher than Diamonds. Moissanite is also far less expensive and requires less maintenance. Because Moissanite is such a durable and forgiving stone, it’s hard for many people to justify spending 90% more for a diamond that looks almost identical.

Because Diamonds are harder than Moissanite, they are less likely to be scratched. Moissanite is more durable than diamonds in other ways—they’re less prone to breaking or chipping. Moissanite also has higher heat resistance, making manufacturing and repairs easier. Overall, there’s a strong argument that Moissanite is the most durable stone and the best bargain for those searching for an engagement ring or wedding ring!