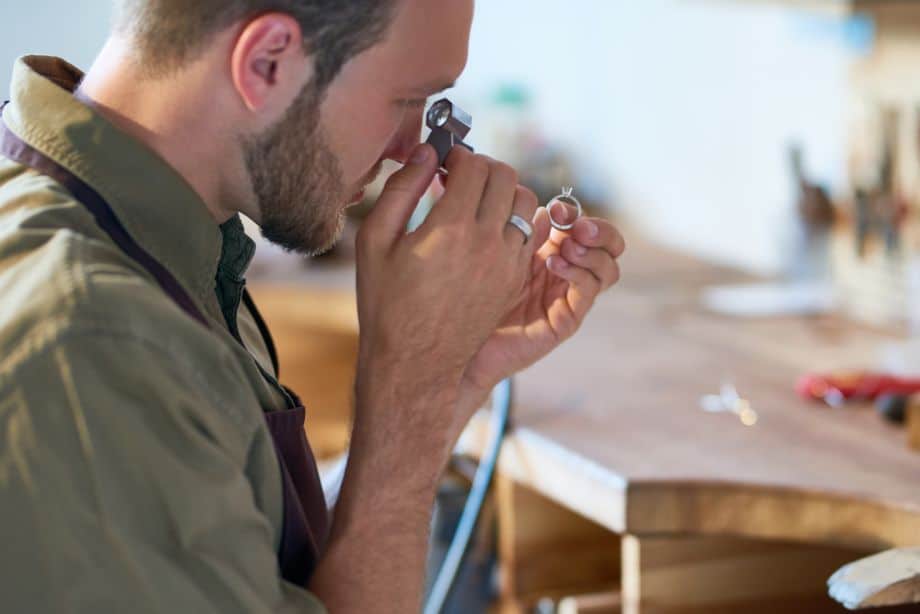 The clarity of stones can help or hurt their value. Clarity involves the quantity, size, color, and position of any inclusions that are in the stone. But what about Moissanite?

Does Moissanite have inclusions? Like diamond, and nearly all other gems, Moissanite often does have inclusions. The presence of inclusions isn’t necessarily a bad thing. Inclusions are natural and vary in terms of size and location. If they aren’t noticeable to the naked eye, they have little actual impact on quality or utility.

What’s the actual impact of inclusions in Moissanite? How are the look, value, and durability typically impacted when inclusions are present? I’ll address all of those issues and more in the paragraphs that follow.

What Causes Inclusions in Moissanite?

Inclusions are essentially any foreign material that got trapped inside the gem or stone as it formed. An inclusion could be caused by minerals, crystals, gas bubbles, or countless other foreign substances or objects. Because of this, inclusions are really a product of the environment that a stone was formed in.

Inclusions are NOT all the same. Inclusions caused by different things can look quite different. When lab created Moissanite (sometimes referred to as ‘Moissy’ for short) forms inclusions, it’s typically due to the growth pattern of the crystals that comprise the stone. Other lab grown stones form inclusions because of the pattern of crystal formation, but also sometimes have inclusions that are caused by the ingredients or processes used to manufacture the stones.

Inclusions are seen as imperfections in stones. They’re usually (but not always) seen as undesirable because gems without inclusions are so much more rare—and because when inclusions are large enough, they can inhibit the sparkle of a stone by blocking light from entering the stone or flowing properly to produce the sparkle effect.

Will Inclusions Affect the Look of Moissy?

The inclusions found in Moissanite are typically very small, in fact, they typically aren’t noticeable without magnification, and won’t impact the flow of light in a way that diminishes sparkle.

The tiny inclusions that are most commonly found in Moissanite are called ‘Needle’ inclusions because of their thin needle-like shape. They don’t have any color to them, so they blend nicely, and don’t detract in any way from the cosmetic appeal of the stone—in fact, they’re generally completely invisible to the naked eye. In the jewelry business, stones that have inclusions that can’t be seen without magnification are called ‘Eye Clean.’ You generally need at least 10X magnification to be able to see the inclusions in Moissanite.

Because the size, shape, and color of the inclusions in Moissanite don’t interfere with its appearance or utility, clarity isn’t graded for Moissanite stones the same way it is for diamonds (which can include a MUCH wider range of inclusion types, sizes, colors).

Do Inclusions Affect the Value of These Stones?

The value of diamonds is influenced most by the 4 C’s (color, cut, clarity, and carat weight). Clarity primarily refers to the presence and nature of inclusions. The following table outlines the system that’s most commonly used for grading clarity (and communicating the clarity derived value that should be attributed to them):

** The number 1 or 2 is used to further segment some ratings. A grade with a 1 beside it means the inclusions are less severe than when there’s a 2 beside the grade. For example, a VS2 could be more substantial inclusions than a VS1.

Because the inclusions in Moissy are only visible under 10X magnification (they can’t be seen with the naked eye), Moissanite would typically fall in the VVS or the VS clarity categories if you were applying the same grading scale that’s most commonly used for diamonds.

I priced out two diamonds through a popular diamond retailer in an effort to show what a difference inclusions can sometimes have in the value of some gems. The information from the above table could be useful here as you see the difference in price and clarity grade. For the two diamonds listed below, all key characteristics were identical—except the clarity grade for the gem. Both diamonds weighed in at exactly 1 carat, had an ‘Excellent’ cut grade, and had a ‘D’ (the most colorless) color grade.

The value of Moissanite typically isn’t negatively impacted by the presence of inclusions. It also isn’t typically increased when there’s a lack of inclusions, simply because typical Moissanite inclusions don’t impact the quality and value of the stone as much as it does for gems like diamonds.

How do Inclusions Impact the Durability of Moissanite?

Generally speaking, inclusions can have a big impact on durability, but that’s less common for Moissanite than it is for diamonds and other stones that more commonly have larger inclusions. Inclusions can be weak spots that make the stone more likely to break if struck in the right spot.

My younger sister saw a real-life example of this when her diamond ring fell off a counter and struck their tile floor. She picked it up and immediately couldn’t believe her eyes! Here beautiful diamond had cracked. It wasn’t just cosmetic damage either, the gem had cracked nearly all the way through!

Diamonds are fairly brittle because they’re so extremely hard, but it’s still unusual for a diamond to crack from a fall like that. It happened to her ring because her diamond had a large inclusion that didn’t severely impact light flow, but it did create a weak point in the gem.

If struck in the right spot, it was more likely to break from the force than it would be if it were struck on any other surface. My sister’s ring landed on the weak spot and it destroyed the gem. Fortunately, the diamond was insured, so she had the ability to replace it. She replaced it with a diamond simulant and pocketed the rest of the insurance money.

Because Moissanite most commonly has tiny needle inclusions, they generally don’t create substantial weak points in the stone. It would take an unusual concentration of those needle inclusions in one small area before your stone experienced any real weakness.

Are Inclusions in Moissanite Ever a Good Thing?

Believe it or not, inclusions AREN’T always bad! Inclusions make some types of stones more valuable (some Sapphires for example). For Moissanite and other stones that have them, they offer unique characteristics that can be used to identify your stone if it’s ever lost or stolen.

Because inclusions come in so many shapes, sizes, colors, and positions, they’re essentially as unique as a fingerprint. Your jeweler, or one of the grading laboratories, can map the inclusions for your ring so you have a record to help you identify your stone if you ever need to have that information in order to recover it.

Do Lab Grown Diamonds or Cubic Zirconia Have Inclusions?

Like Mined Diamonds, lab grown diamonds have inclusions that come in a variety of types, sizes, and colors. These man made diamonds are typically categorized as ‘synthetics,’ which doesn’t mean it’s ‘fake’ (though that’s what it sounds like to an industry outsider).

Inclusions can be really helpful for couples that need to find the most frugal diamond possible, in order to match a very limited budget. While lab created diamonds are significantly less expensive than mined diamond, the cost can still be significant compared to the cost of alternatives like Moissanite. If your heart is set on a diamond, you can easily save money by shopping for a diamond that has THE RIGHT kind of inclusions—inclusions that can’t be seen with the naked eye. Why would you care if there were hidden inclusions in your ring that aren’t impacting the ring’s beauty…if you can get that ring at a significant discount?

Instead of buying a diamond with an FL or VVS clarity grade, you might wisely choose to settle for a ring with a VS grade. As the chart above mentions, you can’t see the inclusions in a VS clarity diamond without 10X magnification. When was the last time that you saw someone pull out a magnifying glass to inspect a friend’s ring? It doesn’t happen, so who cares if there are a few hidden inclusions that bring the cost down? 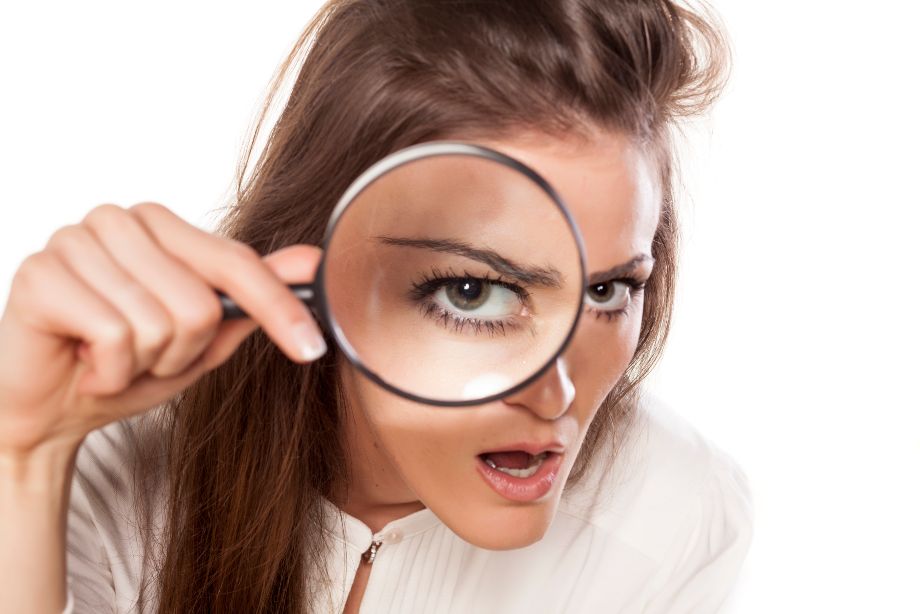 Notice the cost difference for the same 1-carat diamond mentioned earlier that had an ‘Excellent’ cut grade, and had a ‘D’ color grade.

You could save $8,060 on your gem, by choosing the VS2 ring, and still not have any inclusions that others can see! I recently posted an entire article dedicated to inclusions in lab-created diamonds. It’s worth reading if you want to explore the topic further.

‘Diamond Simulants’ are another category of lab created stones that are intended to resemble diamonds. Unlike a synthetic diamond (which actually IS diamond), a diamond simulant is not made of Carbon, and is NOT diamond. Cubic Zirconia (or CZ) is the most famous and widely used diamond simulant in circulation. CZ is an optically flawless stone. Its qualities are carefully controlled during the creation process to ensure uniformity. Because of all those factors, Cubic Zirconia does not contain inclusions. If you’d like to learn more about CZ, and the various ways that it differs from Moissanite, you can read the article I posted outlining the pros and cons of both stones.