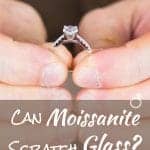 You’ve probably heard that only diamonds can cut, or scratch, glass. Some people use that simple test as a means of identifying the gem—but what about other hard stones, like Moissanite?

Can Moissanite scratch glass? Moissanite can scratch glass. It’s the second hardest stone known to man, with a rating of 9.25 on the Mohs Scale of Hardness. Only diamond is harder, with a hardness rating of 10. Glass is only rated at 5.5 on the scale, meaning that both Moissanite and diamond can easily scratch, or cut, glass.

The ability for one object to scratch another (it’s hardness) has implications that can be important. We’ll cover those in the paragraphs that follow.

How Hard is Moissanite?

Anytime someone talks about the hardness of a stone Mohs Scale of Hardness is typically brought up. That’s because it provides a very simple way to communicate about the relative hardness of various items. I’ll give you a quick understanding of how the scale was developed, along with its strengths and weaknesses.

In 1812, Friedrich Mohs, a German Mineralogist, created the Mohs Scale of Hardness by collecting a group of 10 minerals and then organizing them in terms of hardness. He determined the hardness of each mineral by testing which other minerals were capable of scratching it. After determining the relative hardness of each item, he arranged them in order from softest to hardest, assigning a low number to the first softest item (1) and the highest number to the hardest item (10). The 10 minerals that Friedrich used in his scale are outlined below in order of hardness (arranged from softest to hardest).

Once Friedrich had his original 10 items identified and arranged in terms of hardness, any new material could be tested against the 10 known items to see which other stones were capable of scratching it. Based on that experimentation, the new item could be assigned a number that showed where if fell in the scale.

Cubic Zirconia is another example of a material that wasn’t around when Friedrich created his scale. It has since been assigned a hardness rating of 8-8.5. The reason that you’ll sometimes see a range given for hardness, is because some stones, of a particular variety, are a little harder than others.

Even items like glass can be rated using Mohs Scale of Hardness. The process of determining a number for glass, is the same as the process for rating stones. Various materials are used to try to scratch the glass, some do, some don’t. Those that don’t are softer than the glass, and those that do are harder. It turns out that glass comes in at 5.5 on the scale.

There are a few implications to the hardness of Moissanite, and similar stones, that are very helpful to understand.

1. Many Materials are Capable of Scratching Glass

Based on the known hardness of glass (5.5), there are lots of things that won’t scratch glass—including Talc, Gypsum, Calcite, Fluorite, and Apatite (among many others). There are also MANY things that are harder glass, and are therefore able to scratch or cut it. Those harder materials would include Orthoclase, Quartz, Topaz, Corundum, and Diamond. It would also include stones that have come along since Freidrich assembled his scale—like Moissanite.

Because of all this, a simple scratch test against glass CAN’T positively identify a stone as diamond—it simply confirms that the stone is one of the many materials that is harder than glass. That might be helpful—but only to a very limited extent. Some unfamiliar buyers of used diamond rings might bring a small mirror with them when they consider a purchase, in order to verify that the ring they’re looking at really does contain a diamond. As you now know, that test wouldn’t be conclusive. The ring they’re trying to sell you could easily contain a stone like White Sapphire. That’s a variety that could look very similar to diamond, that is also capable of scratching glass.

A more telling test, would be trying to scratch the stone that’s being represented as diamond with a Moissanite, because Moissanite is capable of scratching any stone OTHER THAN diamond. The seller would need to be pretty confident that their stone is a diamond in order to allow for that test. You could also use a diamond tester device. I just posted another article on diamond testers (and Moissanite testers) that explains how they work, and how much they cost.

2. You Shouldn’t Mix Various Ring Types When You’re Not Wearing Them

My Wife has a diamond ring, a Moissanite ring, and Cubic Zirconia (CZ) ring. If she were to place them all in her pocket for several hours, or even in the same drawer of a jewelry box where they might come in contact with each other, guess what would likely happen. Yep, the harder stones would scratch the softer ones.

In order to protect your rings from accidental scratching damage, it’s a good idea to keep them in a place where they won’t come in contact with each other. There are two really good primary options. The first is a jewelry box. Ideally that box would have the velvety rows that are specifically designed to hold rings in place and separate from each other. This jewelry box, for example, is one of the best values I’ve found. If you’re looking for something a little larger, this huge jewelry box is my favorite—and an incredible value for the money.

One other option is a simple ceramic jewelry holder. It’s not as ideal for protecting your rings, and still leaves them exposed to collect dust, but it will do a much better job of keeping your rings from coming in contact with each other than a simple dish would. Here’s an example of a popular ceramic ring and jewelry holder that costs less than $14.

A good jewelry box is really inexpensive insurance. Many people pay a monthly premium for insurance coverage on their rings. It gives them peace of mind and helps them save money if covered damage should occur at some point. A jewelry box is a small one time cost, and it’s much cheaper than the cost of replacing a scratched ring.

While hardness helps stones resist scratches, it can also be an ‘Achilles Heel’ for stones that are the hardest. The harder a stone gets, the more brittle it becomes. That means that while it might not scratch as easily Cubic Zirconia, for example, CZ wouldn’t fracture as easily as an extremely hard stone, like diamond, if it experiences an impact—like being dropped on a hard surface.

For example, my sister had the diamond in her wedding ring crack in half when it accidentally fell from a counter onto the tile flooring they had in their bathroom. Not all diamonds would have cracked as a result of that same fall. It depends a lot on the inclusions that create weak points in the stone and the way that it lands when it falls. Diamonds are FAR more prone to fracture than stones that are less hard though.

Moissanite is actually well-positioned as a very hard stone that resists scratching … but is less brittle than diamond.

The Costs of Sacrificing on Hardness

Even in a home or office environment, your ring can, and does, accidentally brush or bump against things as you go about your normal routines. Using the same principle that we discussed for Mohs Scale of Hardness, if the item that your ring bumps or brushes against is harder than the stone in your ring, it’s likely to scratch.

Those little scratches can have a big impact on a ring over time. If a stone is too soft, the scratches quickly multiply and start to impact the way light enters and exits the ring. That interference can rob the stone of sparkle.

In addition, scratches on the surface of a ring can become collection points for dirt and oils in your everyday environment. As those elements collect in the groove that the scratch creates, it creates an even greater disruption to the flow of light into and out of the ring, causing the stone to look flat and lifeless.

While a ring with a relatively soft stone might look beautiful during the first day, week, or month that you wear it, scratches can significantly impact the look of the ring—and how you feel while wearing it over the long-term. You’d be surprised just how fast those scratches can accumulate on one of the softer stones … even when you’re trying to be careful not to allow your ring to come in contact with things—it’s ultimately unavoidable.

Moissanite can scratch glass, but so many many other types of stones, so that isn’t a very reliable way to verify the identity of a given stone. While Moissanite is harder than all stones, other than diamonds, you still need to take some reasonable precautions to keep these ‘forever stones’ looking their best as the years pass.

Can Cubic Zirconia Scratch? 4 Reasons Not to Obsess Over It