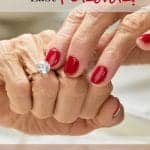 Is it possible to get a ring that will last for generations without taking on debt to buy a diamond? In this post, we’ll talk about buying a ring that will stand as a symbol of your love long after you’re gone—something you can pass on to future generations.

Will Moissanite Last Forever? Moissanite is considered a ‘forever stone,’ meaning that it’s hard enough to resist damage and wear over the long-term if properly cared for. It is the second hardest stone known to man, with a hardness rating of 9.25 on Mohs Scale of Hardness, but just like diamond, the stone isn’t indestructible.

There’s a lot to consider when you’re buying a ring that’s intended to be handed down through multiple generations. In the paragraphs that follow, we’ll talk about the materials that are most durable, and the things that can be most destructive to your special ring.

If you’ve done much reading about diamonds online, you’ll find the same general talking point rehearsed over-and-over. We’re told that diamonds are an investment. It’s insinuated that they hold their value—and even appreciate over time. The further insinuation, is that other stone choices are essentially worthless and have no resale value.

This has always been a frustrating contention to deal with because there is SO MUCH that’s wrong with it. This could be the subject for an entire post (a long one), but I’ll spare you my soapbox for now.

For now, I’ll just say that the typical diamond that’s used for jewelry DOESN’T even hold its value (much less appreciate). You’ll lose AT LEAST 30% of what you originally paid for your expensive diamond ring when you turn to resell it. That’s true whether you resell several weeks…or even several years after buying it. The appreciation line is pure garbage, to be honest. It’s a bald-faced lie that many people are surprised by this reality when they go to resell a diamond for the first time.

But wait … don’t diamonds appreciate? A SMALL portion of diamonds do (technically), but most won’t even be able to keep pace with inflation. If you buy a very unusual diamond (and these typically cost hundreds of thousands or millions of dollars) you may see some actual appreciation. If you’re not playing in that league, then you almost certainly won’t. If you want to learn a little more about the actual resale value of diamonds, and why they make TERRIBLE ‘investments,’ take a look at this article that I wrote on the subject.

Here’s my point, you CAN’T count on much monetary value from the ring that symbolizes your love, but you absolutely can build up a sentimental value that future family members wouldn’t trade for anything.

One aspect of the diamond lie regarding appreciation that has always bothered me, is that the monetary value of the diamond likely wouldn’t matter anyway. Why would you EVER sell your engagement or wedding ring? Why would your kids sell it if you left happy memories of love that they associate with it. It’s much more valuable as a symbol of the love that your kids and grandkids saw you share with your spouse.

Fortunately, Moissanite can hold that sentimental value as well as any diamond on the planet, and for a MUCH lower cost too!

An heirloom ring is one that’s passed down from generation-to-generation. It carries special significance because it represents the love of the people that future generations come from. That extra dimension of significance is truly priceless.

If a child, grandchild, or great-grandchild wants to make your heirloom ring part of their engagement or wedding, they could use the entire ring—or just the Moissanite stone in a setting of their choice.

The Greatest Threats to Ring Durability

While Moissanite is a hard stone, there’s no stone or gem that’s indestructible. With that in mind, here are the biggest threats to the longevity of most engagement and wedding rings.

The hardness of Moissanite makes it more scratch-resistant than all stones other than diamonds. Since diamonds are harder, and can, therefore, scratch Moissanite, you have to be careful not to store diamonds and Moissanite together. If you mixed those stones together, the Moissanite could end up scratched. My wife has a diamond ring, a moissanite ring, and a CZ ring. When she takes them off, they all have to be stored in different drawers of her jewelry box so they never come in contact with each other.

The harder a stone is, the more brittle it becomes. Hardness helps with scratch resistance, but makes the stone more vulnerable to damage from impacts. If you hit a diamond with a hammer, you can break it. You would actually have a more difficult time breaking a piece of Moissanite because it’s not as hard (brittle) as a diamond. By the same token, Cubic Zirconia would be more difficult to break with a hammer than Moissanite, because it’s a softer material.

This occurs when a stone takes on a white haze over time. The original Cubic Zirconia stones that were sold in the 1970s, for example, would cloud up, taking on a milky appearance, as they aged. That haze robbed the stone of its sparkle and cosmetic appeal. CZ manufacturers soon found stabilizing agents that corrected the issue, so that’s no longer a common problem for the stone. Moissanite is a stable stone that doesn’t cloud over as it ages.

A temporary clouding, or haze, can affect any type of stone as dirt and oils collect on the surface of the ring. A good cleaning is all that’s required in order to restore the original sparkle of the stone. Exposure to harsh chemicals can also affect any stone in various ways. It is possible for certain chemicals to etch, or affect the color, or some stones. Both Moissanite and Diamond are typically pretty fuss-free rings that aren’t extremely sensitive, but it’s still a really good idea to remove your ring before exposing your hands to cleaning agents and other chemicals.

A variation of clouding that can happen with Moissanite, is surface haze that looks like an oil slick on your ring. This isn’t common … but can happen. It’s believed that it’s caused, most commonly, by exposure to chemicals. The oil slick is a temporary condition. There’s a specific cleaning process to follow if you ever notice that developing on the surface of your ring. After following it, the ‘oil slick’ will be gone. We’ve never had this happen with my wife’s Moissanite ring, so again, it’s something that happens frequently, or that’s extremely common.

Weak prongs can lead to lost stones and a big replacement expense. The type of metal that you use for your ring will have a big influence on how strong and long-lasting the prong are that hold your stone in place. When prongs get caught on things (clothing, countertops, and other everyday items) it can bend them over time, leading to metal fatigue—especially if some sort of chemical reaction has already weakened it.

A friend of mine told me a story recently about a diamond that he found lying in the middle of the floor in a busy airport. Some poor passenger much have had prongs bend or break, allowing her diamond to slip out of its setting. That kind of thing happens all the time!

How to Protect Your Moissanite Ring

In order for a ring (any ring) to continue to look new for generations, you need to take some reasonable precautions.

Ring Metals That Can Stand the Test of Time

This isn’t a good place to cut corners if you’re looking for a ring that will really pass the test of time. You want something low maintenance and durable. Your best best is Platinum, but it can hardly be considered a ‘frugal’ ring option. Even though this metal is rather expensive, you may be able to fit it into your budget because of the money you’re saving by going with Moissanite instead of a more expensive stone. Platinum is a beautiful silvery metal that isn’t negatively impacted by many of the chemicals and agents (like saltwater) that Gold is.

Gold would be a less expensive option that’s still a good bet. It’s a softer metal that’s more susceptible to scratching, but gold rings can last for generations if properly cared for.

I would avoid buying any kind of plated ring if you’re looking for an heirloom legacy piece, simply because those will need to be replated occasionally (every 3 to 10 years). If you want a ring that can be handed down to future generations, it’s important to choose something that will be low-maintenance for you—and for them. For this same reason, I would also avoid Silver for rings you intend to keep in the family. Silver oxidizes over time, so it needs to be cleaned regularly in order to remain beautiful. Plating it in Palladium or another metal can be a good way to get a more expensive look on a less expensive ring, but again, we want to avoid plating for rings that you hope to keep in the family for generations.

Your beautiful Moissanite ring can become a family heirloom that future generations treasure, but you have to take reasonable steps to protect and care for it—so your ring can look its best through the decades. ‘Diamonds are forever,’ at least that’s what industry marketers want you to believe, but so is Moissanite. In reality, Moissanite can provide a similar multi-generational durability for roughly 10% of what the diamond typically costs!

Does Moissanite Get Cloudy Over Time? – How to Protect it!