What Does Created White Sapphire Mean? 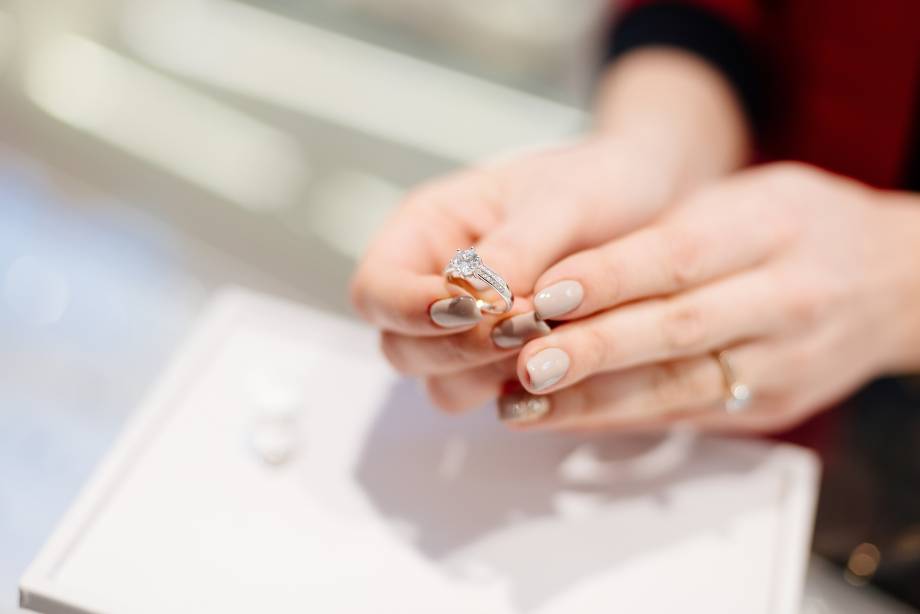 White Sapphire is a beautiful stone for some brides searching for possible diamond alternatives, but terminology can sometimes be confusing. Some White Sapphire says it’s ‘Created’ or ‘Cultured.’

What does Created White Sapphire mean? The term ‘created,’ means that the stone is a man-made gem that was grown in a laboratory setting. Lab-grown White Sapphire is chemically and optically identical to White Sapphire that’s mined from the earth. Even though this created, or ‘cultured’ gem is identical, its origins have to disclosed.

I want you to feel informed and ready as you shop, and compare, mined and man-made White Sapphire, so I’ll share helpful information and concepts related to cultured sapphire below.

What’s the Difference Between ‘Mined’ Stone and ‘Created’ Stone?

White Sapphire is a very rare semi-precious stone that’s free of the trace elements that give other varieties of Sapphire their color. White Sapphire is naturally formed in the earth over thousands of years and then mined, to extract it.

It’s now possible for laboratories to grow, in just weeks, what normally takes the earth thousands of years to produce. The resulting White Sapphire is essentially identical to a mined stone. By identical, I mean that it’s made from the exact same elemental building blocks, visually looks identical, and has the exact same physical properties as the mined stone does.

How is White Sapphire Created in a Laboratory Environment?

Sapphire is a Corundum. The primary building block of Corundum is Aluminum Oxide. There are several methods used for creating lab-grown sapphire. Some methods are more expensive than others, but they also have different capabilities regarding size potential and the speed with which gems can be grown.

As with Synthetic Diamonds, the growing process often starts with a seed crystal. It always involves heat, and can involve intense pressure too, depending on the method used.

To form colored sapphires, additives like Chromium or Boron can be utilized. Chromium would generate a Ruby. Boron, could be used to form a blue sapphire.

What Other Names Are Used for Lab-Created White Sapphire?

There are a number of different names that are used to refer to lab-grown White Sapphire. Some of those could include:

Occasionally people will also use a term like ‘fake’ White Sapphire to reference a lab-created stone. That’s a really misdirected term in this case, because lab created Sapphires are still Sapphires in every sense of the word—they just came to us through a different process than normal.

Here’s an illustration, I had a conversation a couple of weeks ago with someone that works for a medical company that grows new sheets of skin for burn victims. They apparently take healthy skin cells, and use them to grow additional skin cells. The new skin that’s manufactured is an incredible blessing to the burn victims that need to use it.

We couldn’t really refer to the sheets of skin that this company creates in a laboratory as ‘fake skin,’ it’s not—it’s absolutely real skin, that’s just created differently than normal.

In 2018, the FTC (Federal Trade Commission) announced new guidelines regarding ‘Synthetic’ Diamonds. The federal department in charge of ensuring clear and accurate advertising practices, essentially said that lab-grown diamonds are not really ‘synthetic,’ because that word suggests that they aren’t real diamonds. The FTC found that they are real diamonds—they’re chemically and visually identical.

The department suggested using a term like ‘cultured’ to reference the fact that the gem was created in a laboratory, without giving the false impression that it’s fake. They also warned jewelers from using the word ‘synthetic’ to describe a competitor’s lab-created stones, because, in their eyes, that would be deceptive and misleading.

Through their research, and the new guidelines they announced, the FTC confirmed the fact that man-made gems, like diamonds or sapphires, are in no way fake or of lesser quality than gems mined from the earth.

What is Gem Enhancement?

Even gems mined from the earth are often processed by laboratories. It’s incredibly common practice for various types of stones to receive ‘enhancement’ to improve color qualities that will make the gem more valuable.

Heat treatment, for example, can create more vibrant color for many types of colored gems. It’s an enhancement that’s permanent for the stones that are treated. Heat treating can also be used to remove color from certain types of stone.

Morganite, for example, comes out of the earth in various shades of pink. Pink is a popular color ring now. Morganite can also have orange or yellow coloring present in the stone as well. Sometimes the blended color is desirable, and sometimes it isn’t. Heat treating can be used to essentially burn off the yellow and orange coloring, if needed, so that pink is all that’s left, and so the saturation of the pink stone that remains is improved.

What Are Labs and Retailers Supposed to Disclose?

Many clear and colored gemstones are now receiving enhancement through heat treatment and other processes. The aim is to make gems clearer or more colorful to make them more desirable than they were in their natural state.

If enhancements make the kind of beautifully colored stones that we all want more available and inexpensive than they would otherwise be, then they’re a great thing, they just need to be disclosed.

Gems typically don’t have a great resale value anyway, meaning that after buying them at retail, you would often be lucky to be be able to to turn around and immediately recover 50% of what you paid for the gem. You may have a harder time selling a lab created gem locally, because (while awareness has been exploding recently) the general public still isn’t very familiar with them.

Enhancements are done to make gems more desirable. Collectors may want to avoid enhanced stones because unenhanced stones with fantastic coloring are more rare and valuable, but outside of collectors, the fact that a gem’s color has been enhanced shouldn’t negatively impact the perception or value of a ring. Color enhancement is permanent, so there’s no real downside for brides that just love the color of the enhanced stone.

GIA (Gemological Institute of America) doesn’t grade Sapphires at all, but they will evaluate and provide a report on your White Sapphire if you’d like. Those documents can report on physical characteristics like the cut, color, size (weight and other measurements), and shape of your gem.

GIA can also confirm whether your Sapphire is a mined or created stone, and report on any enhancements or treatments that it can detect. Finally, GIA will let you know the part of the world that your stone came from if they’re able to clearly discern that information. A report like this will cost around $70, and can be ordered directly from their website.

What is a Reasonable Synthetic White Sapphire Price?

A quality 1 carat AAA graded White Sapphire that was lab created would likely cost you $300-$350. The retailer you purchase the stone through, and a number of other variables could obviously cause the price to be a little higher or a little lower than this average.

How Can You Tell if a Sapphire is Lab Created?

Lab created sapphires aren’t particularly easy to distinguish from mined sapphires, but there are a few clues that are often present, depending on the process used to form the stone. A loupe is the little eye piece that jewelers use to magnify the stones they’re evaluating. You may want to buy or borrow one, so you can see your sapphire under a 10X, or greater, magnification.

Once magnified, look for small flaws and blemishes inside the stone. Inclusions mean that the stone is likely mined from the earth. A lack of inclusions and imperfections doesn’t necessarily mean that the stone you’re evaluating is lab-created, but it certainly increases the likelihood.

Inclusions like tiny air bubbles, or nail head inclusions (which look like tiny nail shaped bubbles in the stone) can be an indication that that the stone is man-made. The air bubbles aren’t noticeable unless you’re looking for them under magnification. They’re the result of the formation process used.

Many people believe that certain gems have specific powers and abilities that give them function beyond decoration. White Sapphire is believed to help you deal with extreme stress, so you can remain optimistic and creative as you craft your solution. It’s considered a stone of wisdom and positivity.

Who couldn’t use a little help with stress management and positivity from time-to-time? Creativity and positivity are always assets in life, but also in new marriages. The meaning that White Sapphire has carried for generations adds to the charm of the gem.

Is White Sapphire the Same as Cubic Zirconia?

How Much are Moissanite Rings? | Finding Inexpensive Options

Is Moissanite Good for an Engagement Ring? | 8 Useful Facts