Moissanite, How Big is Too Big? | Balancing Big & Believable 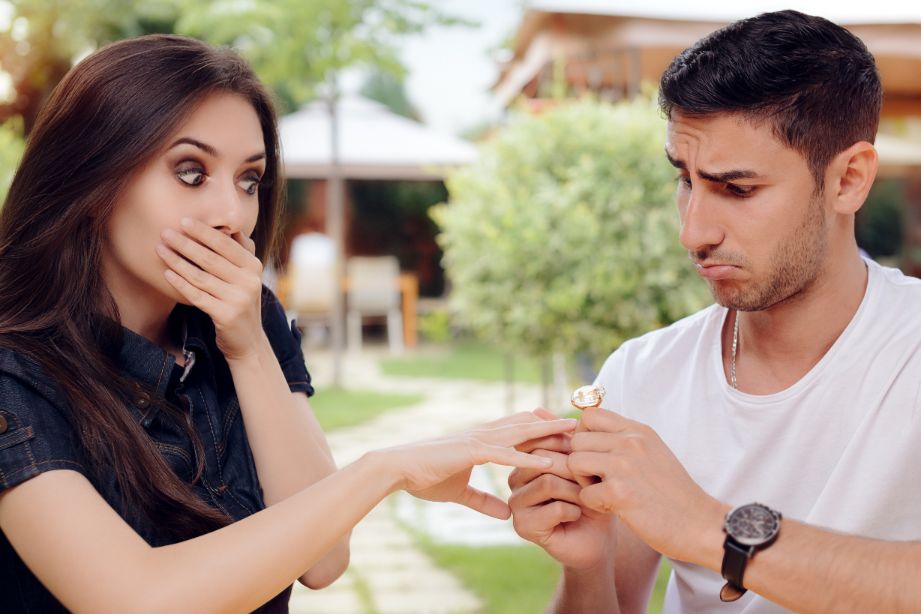 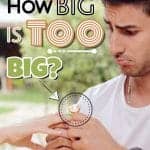 Moissanite is much less expensive than diamonds, so it’s often tempting to buy a much larger stone than you could have afforded if you had chosen a diamond. Before you do though, take time to consider the following question …

With Moissanite, how big is too big? It’s best to purchase a Moissanite stone that’s 6.5mm (one-carat) or smaller if you want people to assume it’s a diamond. Very large diamonds are extremely expensive, so they’re often assumed to be fake even if they look real. Color related issues can also be more pronounced for larger stones.

If you want a Moissanite ring that looks almost identical to diamond, keep reading. We’ll discuss the various elements that you’ll want to give thought to so you can find the perfect stone and setting!

Will People Assume Your Moissanite is a Diamond or CZ?

When an ‘A-List’ celebrity walks the red carpet wearing a ring that has a diamond the size of a watermelon, few people question whether it’s real or not. It’s believable that they could own the world’s largest diamond ring because they’re uber-wealthy (or the ring is on loan from some designer). If you wore the same ring to work tomorrow, everyone would instantly assume it’s a Cubic Zirconia (CZ). Why? Because you probably aren’t uber-wealthy, and they know that.

It doesn’t matter how diamond-like the giant rock on your ring appears to be, because you aren’t the Queen of England, they’re going to assume it’s some kind of cheap imitation. CZ is probably what comes to mind first for most people when they think of diamond look-a-likes. There’s nothing wrong with Cubic Zirconia—unless you’re wearing Moissanite—and would prefer that people assume it’s a diamond.

Consider the flip side of the scenario that was just outlined. If you walk into the office tomorrow wearing a beautiful non-flashy ring with a .75 carat Moissanite stone that appears to be a diamond, is anyone likely to question what it’s made of? Nope, probably not! Why? Because a diamond of that size is something very common and believable. If it looks like a diamond, and isn’t an uncommonly-large size, they’ll typically assume that it is. They have no real reason to assume that it might be made of CZ or anything else.

So with that simple understanding in mind, we’ll come back to the question, how big is too big? According to one large-scale study, the average diamond ring is about 1.2 carats (and costs a little over $6,300). Based on those findings, if your ring is 1.2 carats or smaller, your ring is unlikely to stand out as being unusually large (and automatically presumed ‘fake’). I would advise that you even go a bit smaller than 1.2 carats though. Instead, keep your ring to 1 carat or less if it’s important to you that others believe you’re wearing a diamond. I’ll explain why in more detail below.

The stone size also depends on the size of your hands to some extent. If you’re buying online, you’ll want to try the ring on when it arrives to see how it feels and looks. Don’t be surprised if it feels too large (or small) initially. It often takes a week or two to really settle in and get used to your ring. If you have really petite hands, a smaller ring might make sense. A very common ring size can look A LOT larger on very small hands.

The opposite is also true, that larger hands might do well with a larger piece of Moissanite. The size relationship between the size of your hands and the size of your stone does influence size perception. A 2-carat Moissanite, for example, isn’t ALWAYS too large. Too large is often dependant on the specific styling of the stone and ring—and the size of the hands wearing the ring.

There are three potential issues with wearing huge moissanite stones. What do I mean by huge? At the most basic level, I mean wearing any Moissanite that’s very far beyond the diamond size you would be able to afford, right now, if you were to decide to purchase a diamond instead.

For example, very few people could afford to purchase a 5-carat colorless diamond—it would likely cost around $250,000. This 5-carat Moissanite stone, on the other hand, can be yours for just $479. Can you see why it’s so easy for people to overdo it on ring size, and ultimately buy a, very diamond looking, ring—that no one believes to be diamond? It happens all the time.

When my wife is driving, for example, she’ll sometimes glance as her hand and notice that her Moissanite ring has a greenish hue to it. If she moves her hand or walks indoors, the look of her ring will return to normal. Other people in the car can’t see the same color phenomenon that she can when she catches this effect because they’re seeing the stone from different angles.

Again, this phenomenon is only occasional, it’s only noticeable from a particular angle, and only under certain lighting conditions. This is also something that far more common with Moissanite stones that are larger than 6.5mm (1-carat). Sticking with a Moissanite stone that’s 1-carat or smaller will reduce the frequency with which you notice this temporary change in hue.

These three ‘issues’ are just things that you’ll want to be aware of if you want a ring that ultimately looks as similar to a diamond as possible.

How to Stand Out With a Smaller Moissanite Ring

Here are a few ideas to help your ring stand out without mounting an unusually large stone. If you want a moderately-sized ring that gets noticed, consider buying a colored Moissanite. You can get Moissanite in almost any color you can imagine. These stones essentially look like fancy colored diamonds. I wrote this separate post about all the fancy Moissanite colors that are produced. A pink or blue Moissanite stone could be a beautiful, and eye-catching, piece—without being oversized. For example, This pretty pink Moissanite ring is just under 1-carat and is set against white gold. It’s a head-turner, but costs less than $250! In reality, fancy colored diamonds are typically quite expensive too, but most people aren’t familiar with what they cost—because you don’t see them very often at your neighborhood jewelry store. Fancy colored Moissanite certainly does bring a splash of color and added personality to your ring though.

Creating a halo ring might be another good option to use (with or without colored stones). A halo around your center stone (essentially a circle of small diamonds that wrap all the way around the stone) often makes your ring look a little fancier and bigger, without causing people to instantly assume your ring has a ‘fake diamond’ on it. Here’s a great, and inexpensive, 1-carat Moissanite ring with a halo that I came across, for example.

A three-stone ring is another way to get more total carat weight on your ring (with each one being 1 carat or less), without having an unusually large center stone that screams “fake” at first glance.

What Will YOU Feel When You See Your Ring?

If you LOVE the look of a huge solitaire (something much larger than 1-carat), you should buy one and enjoy it. What matters more than what your ring is made of, and what OTHERS think of your ring, is what YOU think of your ring, and how it makes you feel every time you look at it.

The purpose of your ring really isn’t to impress others or win their approval. It’s something that’s a symbol of your love and commitment. While there’s nothing wrong with wanting your Moissanite ring to look just like a diamond ring. There’s also nothing wrong with being ‘loud and proud’ about the fact that you’re NOT wearing a diamond. Moissanite is a really cool diamond alternative with an incredible backstory and some really rare and interesting qualities.

So, If you really want to wear a softball-sized Moissanite stone, go for it. No, your family and friends won’t believe it’s a diamond, but if YOU love it, and it makes YOU happy to look at—that’s what matters most.

Moissanite stones that are larger than 6.7mm (1.2 carats) or so could appear to be larger than average, and therefore, potentially fake to others. In order to stay in a more common (and believable) size range, I recommend that you purchase a ring with Moissanite stone that’s no larger than 6.5 mm (1-carat). Of course, what you think of your ring is FAR more important than what others think of your ring, so don’t hesitate to purchase a much larger ring if it makes you happy, or you don’t particularly care whether other people assume the stone on your ring is a diamond or not. Your ring is a representation of your love and commitment. If you’re filled with warm feelings every time you look at it—that’s what’s ultimately most important!

When Does Moissanite Look Fake? | The 3 Main Giveaways

Is Moissanite Good for an Engagement Ring? | 8 Useful Facts