Man Made Diamond Hardness: Will it Scratch, Chip, or Break? 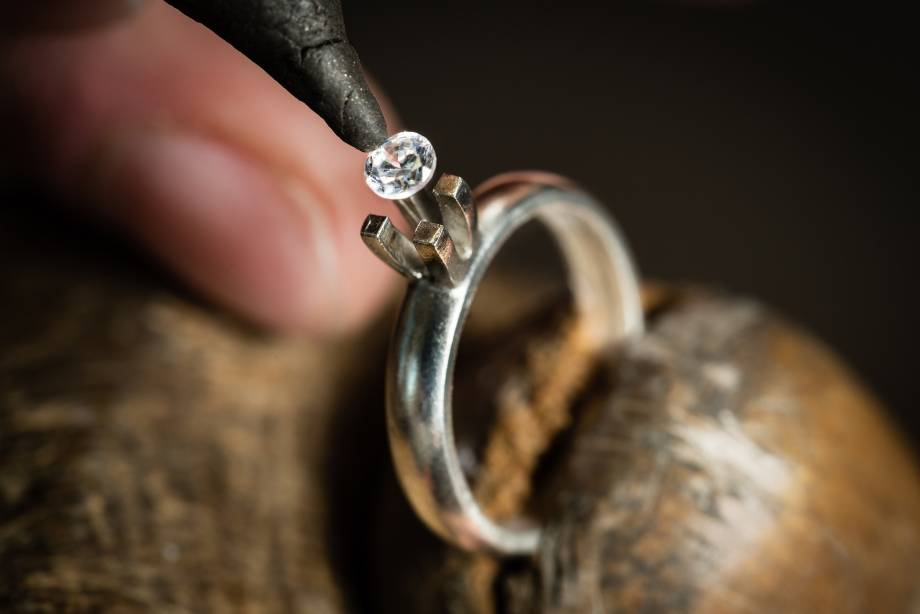 Before splurging on a beautiful diamond for an engagement ring or wedding ring, you want to be sure it’s going to last—that it’s hard enough to resist daily wear.

How hard is man made diamond? Diamonds are the hardest known natural material. They are rated a 10 on Mohs Scale of Hardness, and are much harder than all other gems and simulants. Hardness provides scratch resistance. As softer gems gather scratches, they impact the light flow within the stone, making the ring appear lifeless.

While diamonds are extremely scratch resistant, they aren’t scratch proof. There are also other important considerations that go beyond scratch resistance that should be considered. We’ll cover all that, and more, in the paragraphs that follow.

No naturally occurring material is harder than diamond. Because of that, diamond has been used in a wide variety of industrial applications for many years. In fact, US Synthetics is one of the major manufacturers of diamonds for those specific applications. They provide the diamonds that are used on drill bits, saw blades, and for other similar application.

Diamond can, essentially, cut through anything that’s softer than it is. Because it’s harder that everything else, it’s very effective for drilling or cutting through various materials like stone that could get in the way of a project.

Man made diamond is just as hard, and sometimes even harder, than diamond that was mined from the earth. If diamond is so hard, then how can it not be completely scratch proof? Scratching doesn’t only have to do with hardness, it also has to do with force.

Here’s a simple illustration. Imagine very lightly dragging a diamond ring along a brick wall. Will it get scratched? I would hope not. Now, imagine applying force to the ring and grinding it against into the wall with all your strength as you walk along the wall.

Would you expect to see any difference in the amount of scratching between the two rings? Yeah—the could force (pressure) that’s used to take a real difference.

As you go about activities around your home or office, a diamond ring will be a lot more durable and resistant to accidental bumps and scrapes that could seriously scar softer gems.

Mohs Scale of Hardness is a tool that’s used in gemology to communicate the relative hardness of something. What do I mean by “relative” hardness? I mean how hard it is compared to different type of material.

Do you remember how I spoke about the ability of diamond to burrow through stones and obstacles because it’s significantly harder? Well Mohs Scale of hardness essentially tells us which minerals are capable of scratching other minerals.

In 1805, Friedrich Mohs was a Chemist that was studying rocks. He became interested in observing which rocks were capable of scratching other types of rocks. He eventually gathered 10 elements and started performing scratch tests with them. Once he determined which elements were hardest (the most scratch resistant), he arranged them in order of hardness, with the softest materials on one side of the scale, and hardest at the other.

Talc (the stone that Talcum Powder comes from, was softest. Talc was rated at 1. Diamond was as the other end of the list as the hardest material, with a perfect rating of 10. All other elements fell somewhere between 1 and 10, depending on how hard they were.

Here’s a list of the original 10 elements that Mohs tested, and their ultimate home on the scale (rating).

Once you know how hard elements like gold and diamond are, it’s interesting to gain a little further perspective by comparing them to the hardness of other materials that you’re already familiar with.

Every physical item that your ring could come in contact with in your daily life could have a hardness rating applied to it, based on the materials that it’s made of.

It’s important to understand that the numbers in Mohs Scale of Hardness aren’t evenly spaced. Because of that, the numbers can be misleading. For example, a stone that’s rated a 5 isn’t necessarily half as hard as diamond (at 10). In fact, I’ve been told that the total difference in hardness for the stones ranging from 1 to 9, is less than the difference that’s between 9 and 10.

It’s a “relative” scale. It really just shows which materials are harder than other materials, but it doesn’t clearly communicate exactly how hard they are. Someone that buys a stone with a hardness rating of 8.5, for example, isn’t getting a gem that’s just a little less hard than diamond—it’s going to be significantly softer, and therefore, much more susceptible to wear and other damage.

The Everyday Implications of Hardness

So what does all of this mean? Well, the softer your stone, the more you need to baby and protect it. If the stone on your wedding ring isn’t harder than the items it accidentally strikes and rubs up against as you walk and use your hands everyday, then you’re ring will begin to accumulate scratches. Fortunately, a diamond is going to harder than almost anything you encounter in your everyday activities.

If durability is important to you, then you need to beyond hardness as the only thing you give consideration to. Again, hardness equates to scratch resistance, but want about the gem’s ability to absorb an impact without chipping or breaking? The ability to absorb an impact is referred to as toughness. Here’s the bad news, super hard materials are also commonly very brittle—they have high hardness but low toughness.

A gem that has low toughness might crack, break, or chip if it’s dropped on a hard surface (like a sidewalk or a tile floor) or if it’s struck by a hard item (like a rock or hammer). Diamonds aren’t terrible in terms of toughness, they’re rated fair to good, but it’s one area where they do take a back seat to a number of other types of stones.

My little sister (two years younger) had an unfortunate incident with her ring several years ago. It fell, and the impact cracked her diamond. It completely ruined the the stone. She wouldn’t have been able to afford a replacement diamond at the time, but fortunately, she had insured the ring as a rider on her renter’s insurance policy. The insurance company cut a check, and she was able to repair her ring.

If you’re concerned about a possible crack, chip, or break on day, you may want to talk with your insurance agent to see how much it would cost to insure your ring. That coverage should be pretty inexpensive.

Hard impacts can affect individual stones in unique ways. Not all diamonds would crack if they took the exact same fall and impact that my sister’s diamond encountered. This is because inclusions can create weak points in diamonds. A diamond with a large inclusion in a particular position might break when dropped if the impact point causes the weak spot to fail. The same diamond dropped from the same height, onto the same surface, but impacted at another point that doesn’t cause the weak spot to fail might survive the fall in tact.

Man Made Diamonds are Forever Stones

We’ve all heard the marketing slogan ‘Diamonds are forever.’ Well, it’s true, they can be forever stones, but they aren’t the only ones. While Moissanite, for example, isn’t as hard as diamond,  it is considered a ‘Forever’ stone.

In this context, forever means that the stone is hard enough that it will resist scratches and continue to look beautiful for many generations. It can be handed down to children and grandchildren as a beautiful and sentimental link to the past. Both earth-mined diamonds and man-made diamonds are equally durable in this regard.

Can You Tell the Difference Between Man Made Diamonds and Mined Diamonds?

There’s no way to visually differentiate a man-made diamond from an earth-mined diamond. Even trained professionals, like Gemologists and jewelers, can’t visually distinguish the two. In order to get positive identification, these diamonds typically need to be tested with sophisticated electronic equipment.

What’s the Price of a Synthetic Diamond?

A quality 1 carat synthetic diamond will costs roughly $2,800, depending on the retailer and the characteristics (such as cut, color, and clarity) you choose. In contrast, a similar mined-diamond, will likely cost $5,000 or more. That’s a savings of 44%, but your savings could ultimately be higher or lower.

Is Moissanite a Man Made Diamond?

Moissanite is man made, but it’s not diamond. Still, it is the hardest non-diamond stone available. While Moissanite isn’t identical to diamond, it is quite similar, as far as simulants go, and it’s much less expensive.

The Cost of Lab Grown Diamonds vs Natural Diamonds