Is Moissanite Better Than CZ? The 5 Facts You Need to Know! 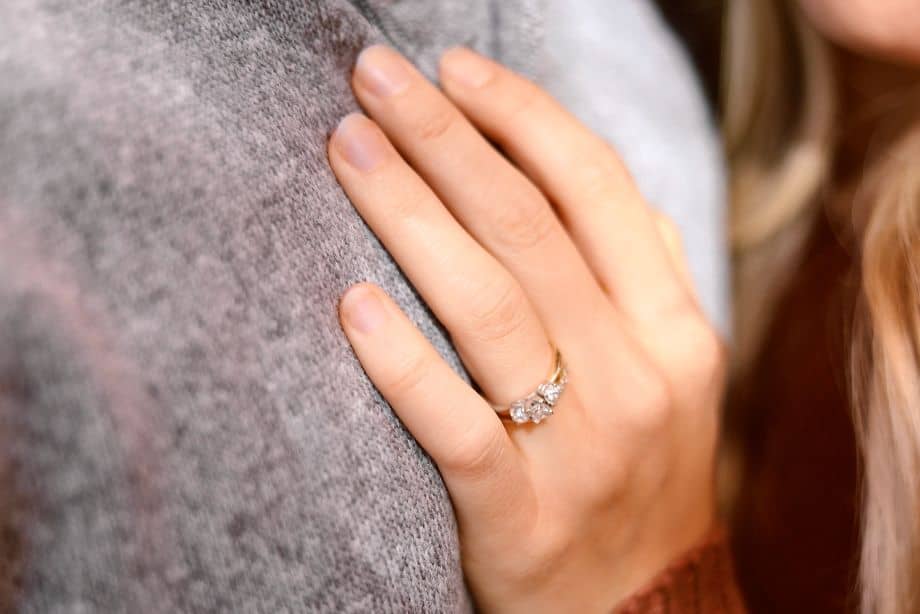 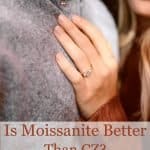 Moissanite and Cubic Zirconia are both diamond alternatives that can look gorgeous and cost significantly less than a similar-sized diamond would. Even though Moissanite and CZ have those things in common, they certainly aren’t the same in many other areas.

More than likely, you’re not shopping with just one characteristic in mind. You probably want the most durable ring you can get at the best price you can find. In the remainder of this article, I’ll share information that will help you determine whether Moissanite or CZ is the best fit for you, based on your unique needs.

Mohs Scale of Hardness is a relative scale that illustrates which stones are harder or softer than other stones. It essentially ranks stones from hardest to softest and applies a numerical rank that helps you to understand where they fall in the hardness ‘pecking order’.

Diamond is the hardest stone known to man, so it has the highest rating on the scale (10). Talc is the softest stone on the scale, with a rating of just 1. Other stones fall somewhere in between the two extremes. Moissanite is definitely considered a hard stone. It has a score of 9.25 to 9.5, making it one of the hardest stones available for rings. At a score of 8 to 8.5, Cubic Zirconia isn’t in the same league as Moissanite when it comes to durability. CZ is far from the softest stone that’s used as a diamond alternative, but it’s not nearly as durable as Moissanite.

The numerical difference between 8 and 9.25 may not seem like much, but the difference in their actual hardness IS significant! Remember, that The Mohs Scale of Hardness is a RELATIVE SCALE. This means that the only thing the numbers clearly communicate is WHETHER a particular stone is harder or softer than another stone. The numbers can’t convey HOW MUCH harder or softer the other stone is. Even jumping from an 8 to 8.5, for example, could represent a HUGE difference in the actual hardness between two given stones.

With that context in mind, the actual difference in hardness between Moissanite and Cubic Zirconia is significant when it comes to the longevity of your ring. Hardness directly equates to scratch resistance. The harder your stone is, the less likely it is to scratch when your hand comes in contact with other objects and surfaces in your everyday environment. By contrast, the softer your stone is, the MORE likely it is to scratch!

This means that it’s much easier to maintain the beauty of your Moissanite stones, over time, than it would be with CZ stones in comparable pieces of jewelry. If durability is one of your primary concerns, but you don’t want to splurge on a much more costly diamond, you may want to stick with something like Moissanite!

Both Moissanite and Cubic Zirconia are known to throw off a lot of sparklebut which is BETTER? If you’re the type that just can’t get enough sparkle, Moissanite is your best bet!

The two primary elements of the sparkle effect are fire (colorful flashes of light) and brilliance (flashes of white light). Moissanite outperforms CZ in both areas (it even outperforms diamonds in this area).

One other important consideration of sparkle, is how well a stone tends to sparkle through dirt and grime. Some stones get muted and dull-looking very quickly. CZ tends to be affected by buildup from dirt and oils much faster than Moissanite. While it’s a good idea to keep your Moissanite clean, it’s known to be a low maintenance ring that continues to sparkle like crazy, even through the kind build-up that dulls other rings!

Those that own Moissanite rings will often tell you that they can’t keep their eyes off all the flashing white and colorful bursts of sparkle they constantly see as they move their ring under light.

Fact #2: Whether both are clean or dirty, Moissanite out performs CZ in sparkle.

Center Stones are carefully cut with very precisely positioned surfaces. Both the flat surfaces (Facets) and the ridges in between those facets help to create the sparkle effect. If the facets, or ridges in between facets, are damaged, it could seriously inhibit the stone’s ability to sparkle.

Unfortunately, CZ isn’t hard enough to hold it’s shaping indefinitely. As rings are worn daily, they come in contact with various things that can wear down softer stones—like Cubic Zirconia. This means that over the years, the ridges in between facets can start to become rounded instead of having crisp and defined edges. When you compare a new CZ stone against a new Moissanite stone side-by-side, the cuts all look similar. It’s hard to imagine that the two stones could wear so differently over time—but they do. 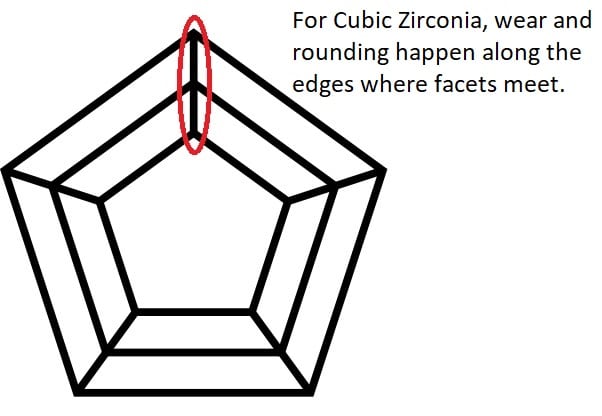 That change has a major impact on the look of the stone. The stone that once dances with sparkle starts to look dull and lifeless. Moissanite is hard enough to hold its angles and edges despite years of abuse from daily wear.

Fact #3: The ridges between facets will wear down and round over time on CZ. Because Moissanite is significantly harder, it retains its original shape over time.

Because of the difference in hardness between these stones, their anticipated useful lifespan is quite different. A Cubic Zirconia will typically last 3 to 10 years before needing to be replaced—depending on how frequently it’s worn and how carefully it’s protected. Of course your CZ stone won’t turn to powder, or fall off your finger, if you wear it longer than the approximate useful life mentioned above—but after years of wear, the stone often looks dull and tired. It doesn’t sparkle like it once did, and surface scratches may be visible.

A Moissanite stone, on the other hand, should be able to last for many decades. Like diamonds, Moissanite is considered a ‘forever stone’. That essentially means that it’s durable enough to be an heirloom piece that’s handed down to future generations.

Being a ‘forever stone’ doesn’t mean it’s indestructible—just that it’s destruction resistant. Diamonds are the hardest stone on earth, but they can still crack, break, shatter, or even scratch, given the right circumstances. Moissanite is similar. You don’t have to baby it as much as softer stones, but you need to exercise some reasonable caution. If you go white water rafting, for example, it would be a good idea to remove your ring, whether it’s Moissanite, Diamond, or CZ.

Fact #4: The typical useful life of CZ is 3 to 10 years, while Moissanite can last through multiple generations.

When you sell a used ring, expect to take a loss. That’s going to be the case whether you’re selling a diamond, a Moissanite, or a CZ ring. If your buyer wanted to pay retail, they would probably prefer to purchase a new ring from a jeweler. Used ring buyers are looking for a deal (savings).

Having said that, CZ is typically inexpensive to purchase new, so it’s essentially valueless on the used market. People can afford to purchase a new CZ, so selling a Cubic Zirconia used is hardly worth anyone’s time in most cases.

Moissanite is more expensive. A one carat Moissanite stone typically costs $300 to $600 depending on the color and where you purchase it. I did some research for a recent article, comparing the resale value of Moissanite to the resale value of used diamonds. I compared real second-hand rings that were being offered for sale in my area to compile that data. You can review my findings HERE.

Fact #5: Moissanite resells for more, but also costs much more to purchase new. CZ costs very little and isn’t as durable, so it can sometimes be harder to resell.

Moissanite is certainly the far more durable stone that can symbolize permanence for engagement rings, wedding rings, and anniversary bands. It’s the better choice if you’re looking for something that’s as diamond-like as possible without having to cover the hefty cost of diamonds.

CZ can be beautiful in rings. While it isn’t as scratch-resistant or long-lasting as Moissanite, it’s still the right choice for some couples. Cubic Zirconia can allow couples with extremely tight budgets to get a ring that should last, and look beautiful, for several years without incurring ring debt. Several years later, once the couple is better prepared for the expense, they can upgrade to something like Moissanite or a diamond if they want to. Another affordable option, is to simply replace the CZ stone with a new CZ stone when the stone starts looking too worn. There’s nothing really wrong with that approach either.

For couples that can afford just a little more, Moissanite offers incredible value. It can provide you with a forever stone, and lots of beautiful sparkle, at a frugal price.

When Does Moissanite Look Fake? | The 3 Main Giveaways

Which is Better Moissanite or Cubic Zirconia?