How is Morganite Graded for Gem Quality? 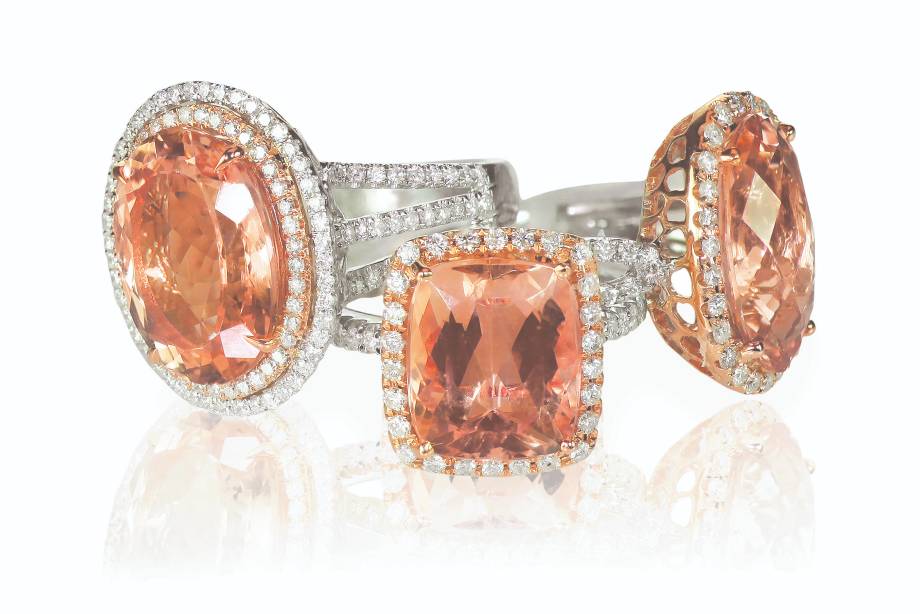 When you’re looking to buy Morganite, how do you know that you’ve found a high quality stone?

How is Morganite graded? There is no universal standard for grading Morganite, but these gems are typically graded by assessing the color quality of the stone, as well as the presence and prominence of any visible inclusions. The combination of letters and numbers used to communicate grades, varies between grading models.

Morganite is a rare and beautiful stone, but quality and value varies. It’s one that is frequently imitated, so it’s important to understand the basics of quality, grading, and verification. This article should help you to shop more confidently and protect yourself.

Many years ago, before my first trip to India, I broke out my trusty Encyclopedia (that used to be our internet), and tried to learn all I could about the country and culture. As I recall, at the time, they said the country had something like 14 languages and 1,000 dialects.

Each area that I visited in that beautiful country, seemed to speak a new language. Many of the people I met were fluent in 8 or 9 different languages—they had to be in order to communicate in their daily lives.

Jewelers and Gemologists often speak various dialects too when it comes to grading different types of gems and stones. They’re usually interested in the same characteristics, but communicate about them in different ways. Things get confusing when you hear two or three different sources giving you grading information in inconsistent formats. Some use numbers, while others use letters. Still others have systems that combine both letters and numbers.

GIA (Gemological Institute of America), can create reports on morganite that document feature detail, but they aren’t grading reports—and therefore won’t contain a grade or score. What the report will reference, are details like weight, measurement information, shape, cut detail, and color description. The report can also verify whether the stone is natural or synthetic, and will mention any enhancement treatments that evaluators were able to detect.

These three groupings categorize the type of stone, in general, based on common characteristics of the gem. In addition to that more general categorization, the system then applies a rating to the specific stone being evaluated as well.

The individual stone grades include:

Inclusions get more significant and visibly obvious as you move down each level until you reach the most included category of stones (I3). The final, combined, grading tells you something important about the family of stone, but also how well a specific gem measures up against the natural characteristics it’s normally known for.

Morganite is a ‘Type 1’ gem, meaning that they’re generally clear stones that don’t have inclusions that can be observed with the naked eye (without magnification). If a Type 1 stone has a visible inclusion, it typically won’t be used for jewelry unless the setting sufficiently covers the inclusion, so it’s no longer visible.

Another system that’s used by some, assigns a letter grade based on color and presence of inclusions. The grading range includes B, A, AA, and AAA. ‘B’ stones are lighter shades and more included. On the other end of the scale, AAA are darker and more clear.

The 4 C’s for Colored Gems

The 4 C’s that determine diamond value, are also applicable to Morganite, and other colored stones, but their value is weighted a little differently.

The famous 4 C’s include:

For colored gems, like Morganite, color is, by far, the most important factor. Morganite comes in numerous shades pink that sometimes blend with orange that lead to more peachy-pink colorings. For Morganite specifically, a darker shade is going to be more desirable and valuable than a lighter shade—stones with deeper and richer coloring are more rare.

The Source of Color

The beautiful shades of pink that are so typical of Morganite, come from traces of Manganese in the stone. As with any mined stone, the concentration of a specific element on the rock constantly changes, leading to variation in the mined stone. Some is mostly colorless, with only the slightest hint of pink, while other sections of stone have a deep rosy pink hue.

Morganite is most commonly found in soft shades of pink that can also incorporate orange, yellow, peach, violet, or even salmon tones as the presence and concentration of various elements cause colors to merge. Diamonds are prized for their clearness. They’re worth the most when they are colorless and free of inclusions and other imperfections. Colored gems like Morganite are valued primarily for the quality of their color.

Light colored stones are most common. Deeper tones with more intensity are more rare, and therefore demand a premium in the marketplace. Of course, the other C’s (clarity, cut, and carat weight) also impact the value of each stone, but they always take a backseat to color with these gems.

The Impact of Heat Treating

Since color intensity and saturation are such big drivers of market place value for colored gems, many suppliers take steps to ‘enhance’ the color of their stones. They can do that through a process known as Heat Treating.

When Morganite is enhanced, it’s exposed to heat that can have several impacts on color. First, it’s intensifies color. It’s like adjusting color saturation settings on your television, making colors more vivid. Stones that looked pale and diluted become more vibrant and lively. This color enhancement is a permanent change for the stone, and isn’t superficial. If you have to have the stone re-cut and re-polished again in the future, the color won’t be affected.

While heat treating increases the quantity of richly colored stones that are available for rings, making them affordable for users that love the look, they often don’t carry the same value as non-heat treated stones with similar color qualities. Gemologists can sometimes tell through careful evaluation whether a stone has ever been heat treated, but only when it was exposed to intense heat that left signs in the crystal structure of the stone. When heat treatment is done at lower temperatures, it’s impossible for even then most skilled gem experts to detect.

It’s an understood ethical expectation in the gem and jewelry business that you disclose when a stone has been enhanced in some way, but that doesn’t mean that all sellers do. Your large, more reputable, dealers often try to be diligent with disclosure. In reality, heat treatment won’t matter to most buyers, but it still helps to be informed before making your purchase in case that is an important aspect of your buying decision.

GIA (Gemological Institute of America) can evaluate stones and creates these reports for you if needed. Just to be clear, these aren’t grading reports, no grades are given, they’re simply reports where certain qualities are observed and reported on.

For Morganite, heat treatment, or ‘enhancement,’ is more the rule than the exception. Most Morganite on the market today has been heat treated to improve color quality.

In reality, a bride or groom that just loves the look and history of Morganite, shouldn’t be concerned at all with whether a stone has been heat treated or not. That’s only really of interested to collectors. None of your friends or family members are likely to ever ask if you Morganite was heat treated—you can’t tell just by looking at it.

If you proactively announced that your stone hasn’t been heat treated, the person admiring your ring wouldn’t have the background on the issue to make them appreciate that fact. They might make a comment that sounds like they appreciate that fact, but in reality, they don’t care—why would they, unless they study gems? It’s just not worth the added cost.

The other thing that heat treating does for Morganite is focus the color of a stone. As I mentioned earlier, Morganite can have multiple elements that cause variations of pink, orange, and yellow to be present in the ring. Sometimes that blended color is desirable, other times it isn’t. By heating the stone, you can burn off some of the elements that introduce unwanted colors into the stone. The heat treated stone can become a stronger pink that’s free of the orange or yellow tones that had been present previously, for example.

Other Names Morganite is Known By

Morganite is a member of the beryl family (like Emerald and Aquamarine), which is why ‘Beryl’ is so often part of the other names that have been used for the stone. Morganite shows a range of pink colors due to traces of manganese.

Morganite is rated a 7.5 to 8 on Mohs Scale of hardness. That means it’s a relatively hard stone, but not as hard as alternatives like sapphire (9) or Moissanite (9.25). Of course diamond is the hardest natural material known to man. Diamond is rated a 10 on the scale.

Morganite is hard enough that it isn’t necessarily fragile, but it likely will collect accidental scratches from bumping up against things over time. Eventually, you may need to have the stone re-cut or re-polished, that shouldn’t be needed until many years down the road though if you’re careful—and may never be needed.

It’s a good idea to avoid using an Ultrasonic cleaners or steamers for your ring, until you have it evaluated by a Gemologist. Morganite can be sensitive to abrupt temperature changes, but the bigger concern, is potential weakness form inclusions or fractures in the stone. It’s a good idea to have a gemologist examine the ring for potential weak points before using a fancy cleaning device.

In the meantime, gently clean your Morganite using warm water, a mild dishsoap (like Dawn), and a baby toothbrush. Be sure to rinse thoroughly and dry the ring completely.

What is Morganite Worth?

Morganite is a rare semi-precious stone. It’s actually one of the most rare members of the Beryl family. The equivalent of a quality 1 carat Morganite stone, would likely be around $300.

Be very cautious when you see ultra cheap Morganite being sold online. The saying, ‘If it sounds too good to be true, it probably is” comes to mind. Quite often (like almost always) those beautiful Morganite stones you see on eBay, and elsewhere online, are just colored glass. I’ve heard from a number of people that have fallen victim to glass sold as Morganite. You’d really have to take your stone to a jeweler, or mail it to a laboratory, to know if your stone is real.

How Can I Test Morganite?

It would hard for you to know, for certain, if a piece of ‘Morganite’ you purchased is actually Morganite, and not colored piece of glass or another type of stone that can look similar (like Kunzite). It might be best to take the stone to a local jeweler for testing.

They can evaluate the ‘stone’ under magnification or do refractive light testing to confirm the stone is Morganite or to let you know that it isn’t. Morganite is about 1.57 on the refractive index. It would probably take the Jeweler less than 5 minutes to test the stone and give you the information that you need.

What Other Morganite Jewelry do Brides Wear?

Buying jewelry accessories that match your ring is so much easier, and more affordable when you’re wearing Morganite than it is with diamond. Brides often purchase Morganite earrings, necklaces, and bracelets that coordinate with the color of their beautiful new ring.

What’s really awesome, is that all of those pieces, combined, are still just a fraction of the total cost of a similar sized diamond ring.

How Can You Tell if Morganite is Real or Fake?

Which is Better Moissanite or Morganite?

What Color is Moissanite? All the Natural and Fancy Options