Can an Engagement Ring be Used as a Wedding Ring? 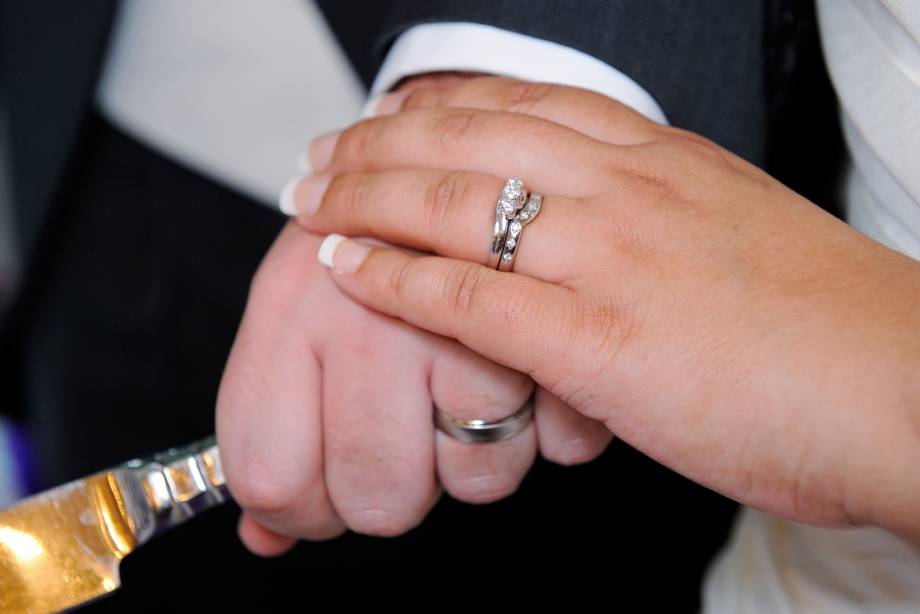 Should you just buy one ring for your wedding, or do you need two—one to use as an engagement ring, and another to give as a wedding band?

Can an engagement ring be used as a wedding ring? presenting an engagement ring at the time of proposal and a wedding band during the marriage ceremony is fairly traditional. Once married, both rings are usually worn together on the ring finger of the left hand. Still, you could certainly vary these cultural traditions and take a more unique approach.

How can you know whether you should get one ring or two, to cover your engagement and marriage? We’ll try to help you determine which path to take throughout the remainder of this article. Keep reading!

The Difference Between an Engagement Ring and a Wedding Band

These rings (which are sometimes now referred to as e-rings for short) are typically much larger, more ornate, and expensive than the wedding band that is added during the marriage ceremony. The e-ring will often have a large center stone, and may have other smaller stones acting as additional decoration around the center stone or around the outside perimeter of the ring.

A wedding band is typically smaller, more simple, and somewhat less expensive than the engagement ring. This is often a band that’s lined to some degree with diamonds or other gems. Those stones sometimes go all the way around the outside of the ring, but other times, only cover the top portion. The gems that line the ring are generally very small which is one reason why these rings typically cost less than the engagement ring. The wedding band is generally kept fairly simple and narrow, so it can butt up closely against the engagement ring and looking like the two rings coordinate if possible.

The wedding band isn’t given in advance of the wedding ceremony, like the engagement ring, but is instead given at the conclusion of the successful union as a symbol the marital vows.

The Engagement ring and separate Wedding Band help to distinguish phases of the relationship and celebrate significant milestones. The real reason for the tradition, however, comes down to marketers trying to sell more diamonds and precious metals for their clients. They have promoted and encouraged the notion that there’s a specific way that ring gifting should be done for engagement and marriage, that conveniently allows them to sell two rings instead of just one. Of course, they would encourage you to come back and buy additional rings for anniversaries too.

Is a Wedding Band Necessary?

The common tradition of giving an engagement ring and a coordinating wedding band isn’t bad, as long as you know that it isn’t really necessary—it’s optional.

As I’ve mentioned in other articles, I knew NOTHING when I started shopping for rings for my girlfriend (now wife of 20 years) in 1998. I certainly didn’t know the difference between an engagement ring and a wedding ring. I knew you bought a diamond, and that was about it.

I was a student at the time, and I ended up borrowing money to buy the ring. That diamond engagement ring also acted as her wedding ring. It was a pretty ring, but not extravagant.

Over the past 20 years, no one has ever asked my Wife if she’s only engaged…or married. I guess they see a rock on the ring finger of her left hand and figure she’s married. This just hasn’t been an issue at all—not even once. There’s nothing wrong with buying a wedding set, some of them are really beautiful, but if it’s a financial burden, or you don’t like the look, you don’t have to go that route.

I would suggest that you have an open conversation with your partner to learn their preference. Some people love wearing multiple rings, others are more minimalistic, and would prefer just one.

The Cost of Adding a Wedding Band

If you’re buying a diamond Wedding Band, they’ll commonly range from approximately $1,000 to $3,000. Of course, that’s just an average—it is possible to find higher, and lower, cost bands.

If money is tight, like it was for me when I was getting married, an extra $1,000+ might be difficult to swing. If you like the idea of the Wedding Band, but need a more ‘frugal’ option, you could get Cubic Zirconia or some other diamond simulant for the second ring. Because the stones on a Wedding Band are typically very small, it would be hard to tell it doesn’t also contain diamonds. You would end up with the look you like and the price you need.

If you REALLY need to tighten your belt financially, you could explore bridal sets that give you both an engagement ring and a wedding band, which both have diamond simulants in them. Again, a diamond simulant is a stone that looks a lot like a diamond, but isn’t. These rings can be really beautiful, and can bring your total cost down to $100 – $1,000, depending on your choice of metal and stone types used. Sterling Silver will be on the less expensive side, with 14k or 18k gold (white, yellow, or rose) on the more expensive side.

Click the following link if you would like to visit the retailer that I would typically go to for very inexpensive bridal sets. These are typically Sterling Silver ring sets that run $200 or less.

If you want to spend a little more, to get gold instead of silver, try the mid-range bridal sets available through this online retailer. Use your mouse to hover over the ‘Bridal’ tab, and then select ‘Bridal Sets’ below. 10k to 14k gold will run about $800 for many of the available options. 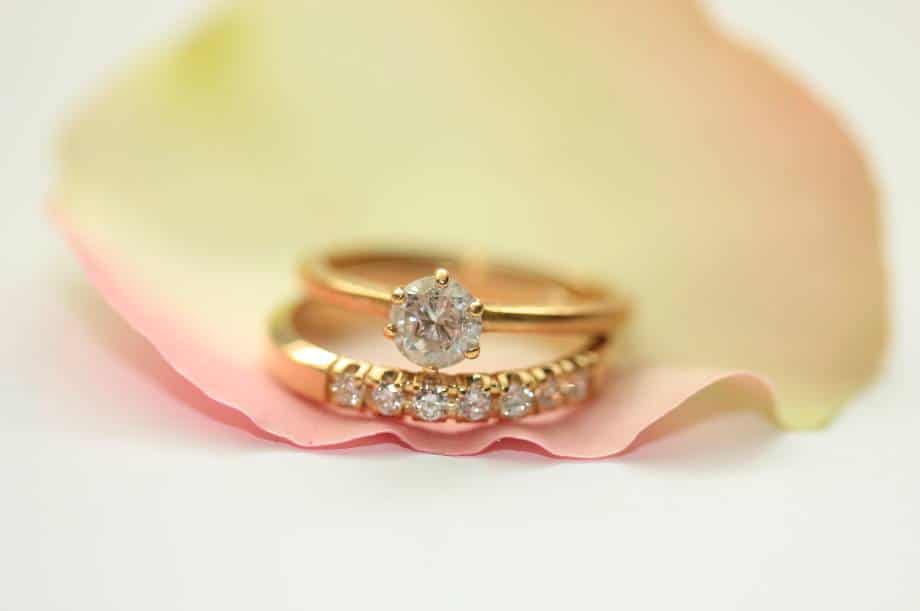 How to Wear an Engagement Ring and a Wedding Band at the Same Time?

The most traditional way to wear a Wedding Band and an engagement ring together (at the same time), is to put them both on the Ring Finger of your left hand. Why your left? Because the long ago, the Romans believed that there was a unique vein (the vena amori) in the ring finger of your left hand that ran directly to your heart. The heart has long been associated with love and commitment. Wearing the ring that symbolizes your deep love and lasting commitment on the finger with this ‘love vein’ was symbolic. Even though modern anatomy doesn’t support the theory of a special vein that runs from that particular finger to your heart, it’s a symbolic sentiment and tradition that continues today throughout much of the world.

When both rings are worn together in this way, placement is traditionally important. You would put your wedding band on first (nearest to your heart), and your engagement ring on the same finger, so the two are side-by-side.

Some brides don’t like the look or feel of having two rings on the same hand, so they often do one of the following variations.

While the three additional options outlined above aren’t very traditional, you can vary the norm if you want, or need, to accommodate your style preference or comfort.

Using a Wedding Band Instead of an Engagement Ring

Brides who don’t like the look, or feel, of wearing two rings at the same time, can keep things really simple by leaving their engagement ring in a jewelry box at home, and only wearing their wedding band. Because the wedding band is often more narrow and simple, it can often be the most comfortable option.

Moms sometimes choose to do this because a big solitaire can sometimes get in the way or scratch the baby if you aren’t careful. My wife started just wearing a wedding band when our children were young for that very reason.

How to Make Just One Ring Feel Special

Purchasing a separate e-ring and a wedding band isn’t the only way to mark or celebrate your transition from being engaged to getting married. Another potential idea, is to buy a nice engagement ring that’s topped with a quality Cubic Zirconia. Once you’re married, you could swap out the CZ or a diamond, a Moissanite, or a colored gemstone of their choice. Another simple and inexpensive option, that could be meaningful, is to ‘borrow’ the engagement ring in the days leading up to your ceremony to have the inner band engraved with a special message. When you give the ring back during the wedding ceremony, it isn’t the same old ring. It’s the same ring, we an added sentimental value (the special new message).

By doing it this way, you keep your upfront costs low, but still give your soon-to-be spouse something different and special to mark the occasion (a special new message, a new gem, or some other stone).

Where Do I Put My Engagement Ring During the Ceremony?

Can Any Ring be Used as an Engagement Ring?

Absolutely! Whether it looks like a traditional engagement ring or not, you could use it. I’ve heard of people during hard times (like The Great Depression) using a piece of yarn tied around their finger. It isn’t very traditional, but it can carry the same symbolism that more traditional rings do.

Do Engagement Rings Have to Have Diamonds?

No, it’s really a matter of personal preference. An engagement ring doesn’t have to contain a gem of any kind. It could contain a simulant stone, or no stone at all if you’d prefer. Similarly, there are no real rules for the metals either. It could use a precious, semi-precious, industrial, or plated metal.

Why Are Man Made Diamonds So Expensive?

The Difference Between a Promise Ring and an Engagement Ring